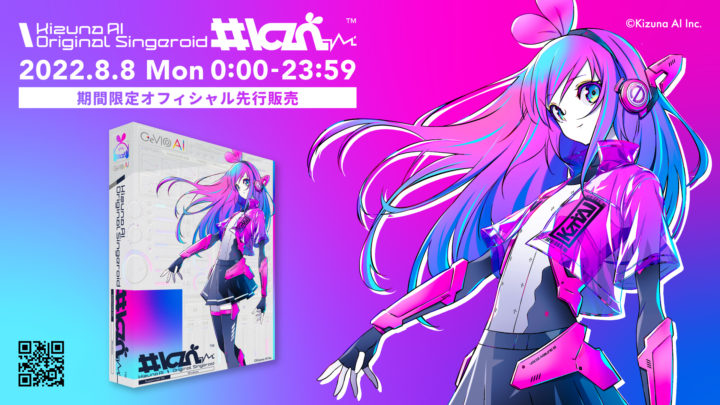 On February 26, 2022, virtual talent “Kizuna AI” went on indefinite hiatus after “Kizuna AI The Last Live hello, world 2022”. The concert succeeded in dominating #1 and #2 on Twitter world trends. An AI specializing in singing named “#kzn (Kizuna)” (a.k.a. #kzn-chan) made an appearance during the encore of the last live concert and is now available as a CeVIO AI (Song Pack), a voice synthesis software.

#kzn-chan will serve as a hub to connect with everyone and support Kizuna AI and creators while Kizuna AI is asleep.

A video of #kzn-chan singing for the first time by herself was shown today in a live broadcast on Kizuna AI’s YouTube channel “A.I.Channel.”

Furthermore, it was announced in the stream that the pre-sale for CeVIO AI “#kzn” will start on August 8th for only 24 hours. More details will be announced later on #kzn’s Twitter.

Birthday: 2/26/2022
An AI specializing in singing will serve as a hub to connect with everyone and support Kizuna AI and creators while Kizuna AI is asleep.

“kizuna (#kzn)” is an AI that specializes in singing born from Kizuna AI’s voice. Kizuna AI went into indefinite hiatus to achieve further growth to further connect with everyone in the world.

Pre-order site: To be announced on #kzn Official Twitter

Price: To be announced